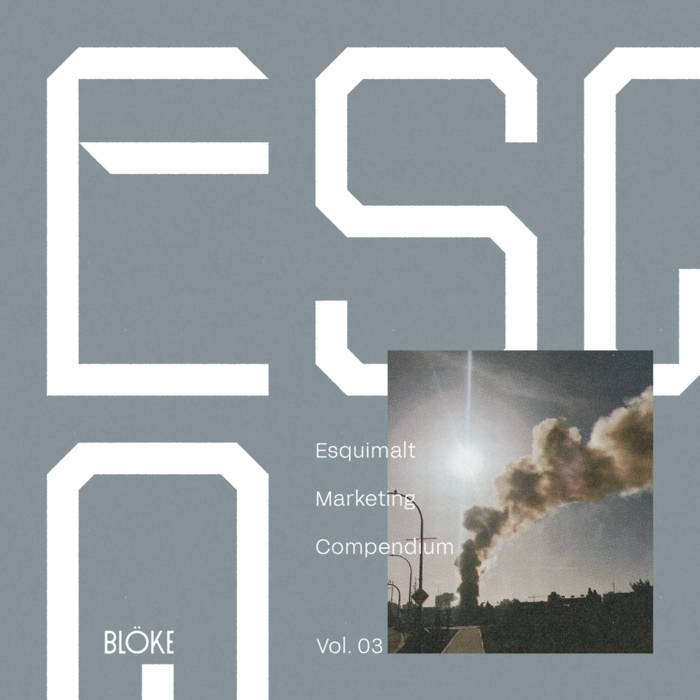 Esquimalt Marketing Compendium Vol. 3 is the third of a four part series that will be released April through to July.

Esquimalt Marketing Compendium was written over a ten year period, all of it in either Rock Bay or Esquimalt in British Columbia, Canada. Some of these ideas were seeded and sketched inside what was once an attic studio at The Number, an agency I worked for at the time. All tracks were finished in a house that I now own, within shouting vicinity of my wife and two kids.

When I began this project, I was DJing club music every month, sometimes more, and was already happily projecting my own version of dance music to the world across hiphop, footwork and techno mutations released under the Monolithium moniker.

I believe there is some craft in repurposing, reframing and recycling styles of the moment, but my early releases always felt less like I was creating something of my own and more just contributing to a conversation. Imposter syndrome etc. The ideas that evolved into this record began with the question: "what do you actually sound like?" After a couple of years lounging on stylistic coattails, the challenge of staring myself in the face both sonically and emotionally was compelling.

Lucky for my ego, ideas and sketches materialized. Through sound design experiments and hardware jam sessions, a process emerged where my mind, heart and hands could occupy a liminal space with the machines and software.

This is not to say that the new record is free of influence; what a foolish assertion! But alongside Dan Lopatin, Robert Wyatt and Booth/Brown, these compositions contain various colours, vapours and echoes of my family, friends and the beautiful community in which I live. This music is about my life.

The record took ten years to complete for a few reasons. Because this material was contingent on the right mind state, there were periods of weeks—sometimes months—where I simply couldn't manage, assess or evaluate the tracks. So I didn't force it, didn't apply pressure. The other factor of course is just... life needs living. Since I started writing this music, I bought a house, moved across town, had two kids and saw a larger pull of time and brain toward my 9to5.

This music will always be close to me. I've listened to these tracks hundreds of times on walks around Esquimalt and downtown Victoria.

This music was conceived, recorded and realized on unceded Coast Salish* Territories, specifically of the Lekwungen and WSÁNEĆ peoples.

Gratitude; Nathan and Emily, thanks for being you. Carlin, thanks again for great visual representation of my work. Sean E, your music has been a big inspiration. Will McFarland, thanks for letting me baby your Juno60. Niels Nohr thanks for lending me the Onyx desk and the Voyager. Chris Nohr for letting me use the attic. Aaron B, your broken MemoryMan is all over this record.

Sheryl, Henry and Juno; I love you.